This is how it works-
I love to run but there are times when I would rather not. This is when the voices start. Chants, name calling, guilt and reverse psychology is how they get me up and out the door. I don't really mind the voices and have actually started looking forward to their daily calls. Together we have formed a running club that supports, encourages and competes with each other. I love these peeps. They are much more experienced, talented and tougher than I am. Pushing me out the door, through the hard miles and up the monster hills when I am feeling lazy or want to give up. Some people have "real" training partners, coaches and support crews. My team is ALWAYS with me and helps me to keep my eye on the prize and not veer off the track. Sounds crazy- Yeah, probably is.........

We don't know what the future holds but the one thing we can count on with absolute certainty is that we are in the driver’s seat and have the ability to choose how fast we get there and the direction we drive.

Many times in life we find ourselves involved in things we really don't want to do. For runners it happens all the time. Why? Because, while running is a personal journey, it is also a very socially active community. You can show up to a race as a stranger and leave with many new friends. This is a very cool aspect of our dumb hobby but it can also cause us to do silly things. Like sign up for an event because everybody else is or it feels like people expect you to join them. Here's some solid advice- If it's not your idea, really and truly your idea, then don't do it. Don't rush the process. Just say no. Here's why….

The best part of accomplishing any goal is the journey to get there, the hours of hard work you put in and the feeling of knowing that every ounce of sweat is bringing you closer to the dream. If that is compromised then every step will follow and when the big day comes, regardless of how others view the results, you will be unhappy knowing that you could have done more along the way. Putting something on hold until you can dedicate yourself fully to the mission is much different than abandoning any notion of chasing the dream.

I had a very vivid moment of clarity during my DNF at Leadville a couple of years ago. It was something I already knew but had never really understood or tested. If YOU don't want something, if you are doing it for anybody other than yourself, for any reason other than the simple fact that YOU want to do it, if you don't feel the fire to train then YOU don't really want it and should take a hard look at why you are there in the first place. Running isn't always a selfish sport, helping others is top of the list awesome, but the decision to chase YOUR goals is, and must be, a selfish decision.

I have run many races and raised money for charities, specifically the ACS, simply because I thought it was expected of me. Note the word ‘thought’ in that statement. In reality, nothing was expected of me from anyone other than myself in some self absorbed and warped egotistical world. I can go back on my blog entries and read between the words of many race reports and tell you exactly which ones were driven by this nonsense and my mindset wasn't right for the day. I don't regret any of it, because money and awareness was always raised and that is very important to me, but there have been many life lessons learned through those experiences.

Take your time, get your head right and decide what it is you want to accomplish before jumping in with both feet.  Once you KNOW what it is everything else will fall into place. It doesn't have to be a half marathon, full, 50k, 100 miler or something that will impress anybody else. Just has to be something that impresses you and makes you proud of yourself. Going from "talk" to actually doing something is an internal and very personal decision that starts and ends with you.

It's fun to dream about running the Barkleys or Badwater but timing is everything. Right now if either of those opportunities presented themselves I would choose not to take them. That doesn't mean that I wouldn't pursue them later or I couldn't get it done. Just means that right now I am at a point in my life where I am not ready to commit and truly focus on what is required to do it right. In fact, just last year I had to pass on an amazing opportunity to join a team for an adventure race of epic proportions. It was a truly tough decision but I knew that I wouldn't be able to give everything needed to truly help the team. I could have been selfish and went anyway but that wouldn't have been fair to anybody - especially myself.

The future holds many opportunities. Nothing has to happen today, tomorrow or even this year. Once in a great while something comes along that is truly a ‘once in a lifetime’ opportunity but those are incredibly rare. Most things can wait until the time is right for you. Run your race on your terms. 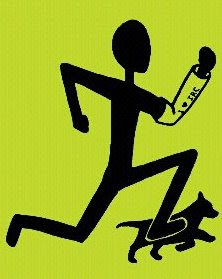 Voices In My Head

Promote Your Page Too